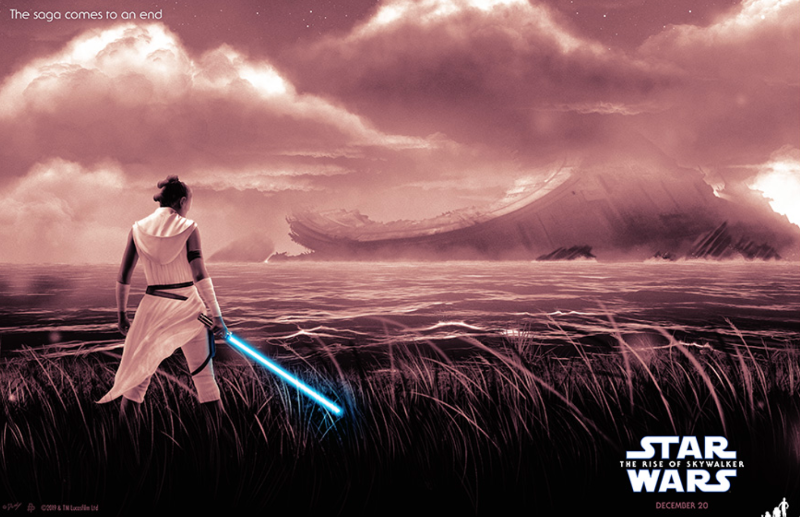 From Hagley Road to Hollywood

"I've got non-disclosure agreements coming out of my ears" says Birmingham designer Doaly, with the relaxed patter of a man who's always got non-disclosure agreements coming out of his ears. "So we can't talk about what I'm working on right now." You may not have heard of him — it's pronounced dough-lee, by the way — but there's a very good chance you've seen his work. He did, after all, produce official movie posters for, get this, The Rise of Skywalker (above) and Avengers: Endgame (below). But it wasn't always commissions from colossal Hollywood studios for the Hagley Roader. Every career comes from somewhere. 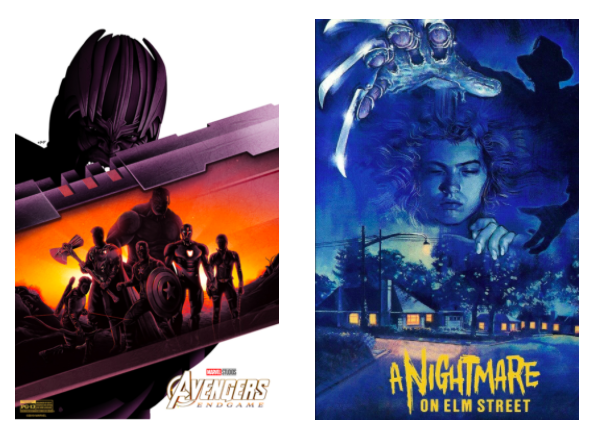 GROWING UP
"As a kid I grew up surrounded by posters," he says. "I shared a bedroom with my two older brothers, all three of us were movie-obsessed but being as they were older, they'd put posters up of films I wasn't allowed to watch. The one I vividly remember was the poster for A Nightmare On Elm Street [above]. A wonderful blue, monotone illustration with orange typography. Nancy asleep in the middle, Freddie's hand hovering above. I studied that poster over and over. I knew every inch of it. And as I studied it I had to come up with my own story about what might happen in the film. Looking back, I'm sure that bedroom played a part in how my career panned out, but it's not as if I knew from that day forward I wanted to design posters. Far from it." 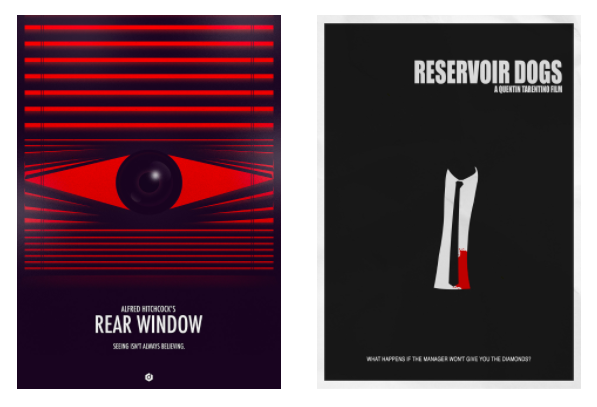 GETTING GOING
"I did graphic design at Wolverhampton Uni, which was a great experience and it's helped, in some ways, with what I do now. But I felt what I'd learnt at university actually made me really rusty at what I loved: illustrations." It was only after graduation and a few, shall we say, dryer design jobs, that Doaly tried to make a name for himself in the movie world, which meant teaching himself from scratch. "I began doodling. Doodling on post-it notes, my take on one of my true passions: movie posters." From there he went on to produce fan art, Doaly's work having no official tie whatsoever to the studios. "Fan art's a subsection of movie art," he says "huge in the US, powered by people who produce posters purely for the love. The first one I did was a minimalist Reservoir Dogs poster [above]. Then I did a Rear Window design, shortly after, and it got some serious traction on movie and and pop culture websites. All this snowballed and I woke up one Saturday morning in 2013, to an email from a movie exec offering me official work. The movie was Springbreakers. I thought it was prank." 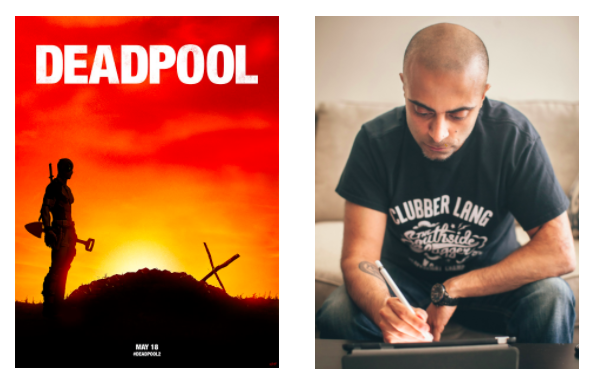 GOING VIRAL
Before the commissions started flooding in, Doaly worked in web design with a string of marketing departments. He learned quickly the importance of social media and the self-promotion that comes hand-in-hand with it. A knack for turning an idea into a viral hit, perhaps his most seen design wasn't an official movie poster at all. Jumping on the faux Instagram rivalry between X-Men star Hugh Jackman and Deadpool actor Ryan Reynolds, Doaly found the sweet spot after the launch of Logan and before the launch of Deadpool II. Both movies were being talked about, with Jackman saying Logan would be his last appearance as Wolverine and Reynolds often saying he'd like to appear opposite his pal, on screen one day. SPOILER ALERT, with Wolverine... brace yourself... dying and being buried beneath an iconic X made of sticks, Doaly imagined a scenario where Deadpool — famous for breaking the fourth wall — would appear by his grave, ready to dig him up and take him out. The caption simply read "Rise and shine princess, we have a premiere to get to." Within hours both Hollywood stars had shared the design and his work had gone global. "For days my phone was going crazy," he recalls.

Then, at the turn of the year 2018/19, Doaly set himself the target to design an Empire cover, the magazine he's read since he was a kid. It took him just a few weeks to tick that off his 'to do list' getting the commission to design the publication's Captain Marvel cover. 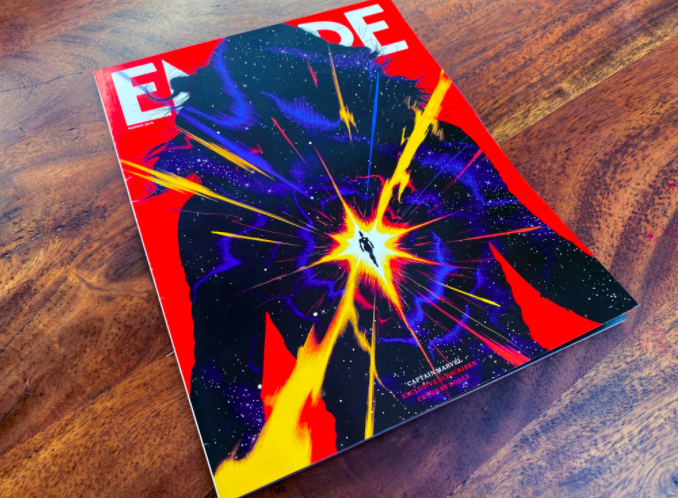 GOING FORWARD
The work kept coming: Disney, Marvel, Pixar, Warner Bros, 20th Century Fox, Doaly soon had a page on IMDb. "Up until around then," he says "the studios were asking me to create art based, mainly, on the trailers they'd already launched. But more latterly I've been working on pre-production design for both films and video games. The sort of stuff you don't often see — forming the design material and visual language at the early stages of the movie's conception. It's not reactive stuff, like it has been historically. Now, I'm contributing to the look and feel of what ends up on screen and I'd like to do a lot more of that."

Adding yet another string to his bow, and this time well out of the movie zone, Doaly was hired by cycling outfit CANYON//SRAM for a complete team branding redesign. "It's amazing to crossover, out of pop culture and into others areas. It's a challenge, of course, and to see athletes wearing my designs is a mad rush. From the socks to the training caps, even the bikes they rode had my work emblazoned on them. It was immense." 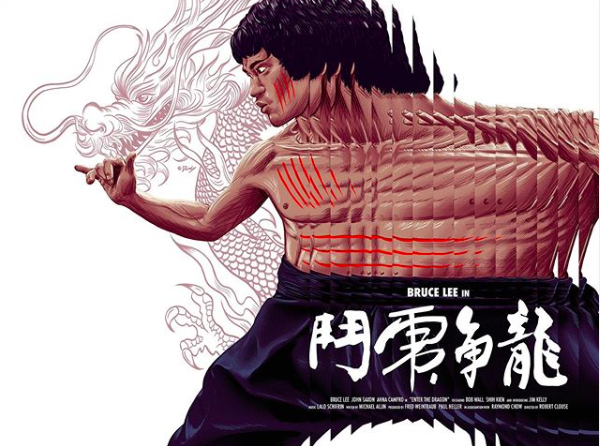 COMING HOME
As global as things have got, Doaly still considers himself very much a Brummie, designing from a small studio in his Birmingham home. He recently produced an Enter The Dragon print to mark the arrival of Once Upon A Time In Hollywood, at Brum's Electric Cinema — a movie, an actor and a venue he's long had love for. "You can feel the nostalgia and the history of film at The Electric," he says. "It's not about having the biggest screen or the best audio, it's about charm and character, and The Electric has both by the bucketful." And he wants to do more in his home town. Doaly's exhibited in London and New York but never here, in Brum. "When I do, I sort of want it to be a 'Greatest Hits' of my career. So I may need to leave it a little longer. That said, I'm all ears to suggestions for something sooner." All ears, that is, if he can clear them of those pesky non-disclosure agreements.

From Couch to Ouch

Going Against the Grain

Birmingham's next independent bar and restaurant

Your History Needs You

Birmingham Museums could do with some help

Prosecco at the pictures

The Barber's latest exhibition is online and interactive

In From The Wilderness

The latest 'at home' restaurant offering