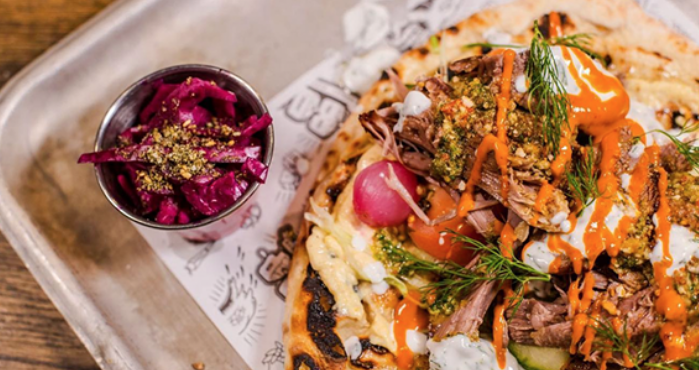 Gauche namedrop alert. About 15 years ago I interviewed Heston Blumenthal and he told me that kebabs would be given the same gourmet treatment that burgers had already undergone. It may sound obvious now, but back then an entire editorial thought he'd gone (huh-huh-huh) Heston Blu-mental. Turns out he knew more about food than half a dozen gacked-up twenty somethings and it was, indeed, so. Birmingham's best example of the humble kebab's rise to epicurean note is Bop Kebabs at The Old Crown, Digbeth. The brainchild of cheffy pals Matt (Button Factory, The Distillery) and Doug (Harborne Kitchen, Tiger Bites Pig), Bop was born of a mutual love of the flavours of the Middle East and seasonal British ingredients. The first dish out of the door was the only disappointing one — a dry lamb kofta, which couldn't be saved despite a seriously delicious sauce. Incredible sauces became a theme, here, very clearly made fresh they were alive, dynamic, bright and contrasting throughout. Order the whipped feta and asparagus mezze (£4.50), charred vegetables marrying consummately with their tangy, rich and slightly salty bedfellow. Fried potatoes with crispy onion and dill yoghurt were spot on in texture and taste. Ordering anything else as mezze might be a step too far if you're kebabbing for mains. And you absolutely are kebabbing for mains. Served on homemade sourdough flatbreads that are given two days to proof, fluffing just enough to be a stable vehicle for the main event. Cripes, the smoked lamb shoulder (pictured) — of which there was frankly enough for two — comes with smoked baba ganoush, candied pistachio, mint zhoug and radicchio. Clearly excellent quality meat, silky and supple the chefs braise it for ten hours, because nine is *definitely* not enough. Perhaps the only thing treated with more love, though, is the chicken shish with hummus, chicken skin dukkah and pomegranate. Chicken breast is brined for 24 hours with szechuan pepper, ginger and anise. Then Matt and Doug make a dry rub including fennel, caraway, coriander and about 6 other ingredients. This was chargrilled to perfection, making me think that kofta was a rare error, and it's brushed with pomegranate molasses, offering fruity notes that bounce like a kid at Tumble Jungle off the salty skin and zesty sauces. Why have a kebab you'll regret after you've been to the pub, when you can have one you won't regret in a pub? Speaking of which, hats off to the Old Crown which is looking absolutely stunning these days. Menu

Birmingham to get Two New Museums

As part of Coventry City of Culture

Spend £15 Get a Free Cocktail

The Birmingham Opera Company will perform in tribute to Sir Graham